Last night as I was writing our daily blog post in Bowling Green, Team #GilmoreGreatRace was outside with the Packard doing our nightly check up and maintenance routine. Shortly after posting, the team identified a problem with the car...one that would lead to a late night.

As the team went over the engine area, they noticed some discoloration around a head stud. They examined the nut and 'round and around it spun. When they removed the stud, they noticed the lower threads were culprit and not gripping properly. No good. Unfortunately, we were running without a torque wrench so the team resorted to sourcing solutions around the lot and by calling local mechanics. Finally, it was Team Hagerty to the rescue! They were able to share extra washers, liquid gasket compound, and some cleaning compound. Our team used the materials from our friends at Hagerty to seat the stub and stem the leak. It was a "quick fix" and we weren't confident that it would hold. But, we had to try.
After a late night, the day started early with the Packard #62 across the start line at 8:02am Central Time. Navigator Jacob Onderline (age 17, a home school sophomore) and his dad, Driver Mike Onderline, were piloting the Packard over 175 miles for Stage Four of the race. The Support Crew headed out shortly after and it was not long before we crossed into Indiana, one more state closer to home! 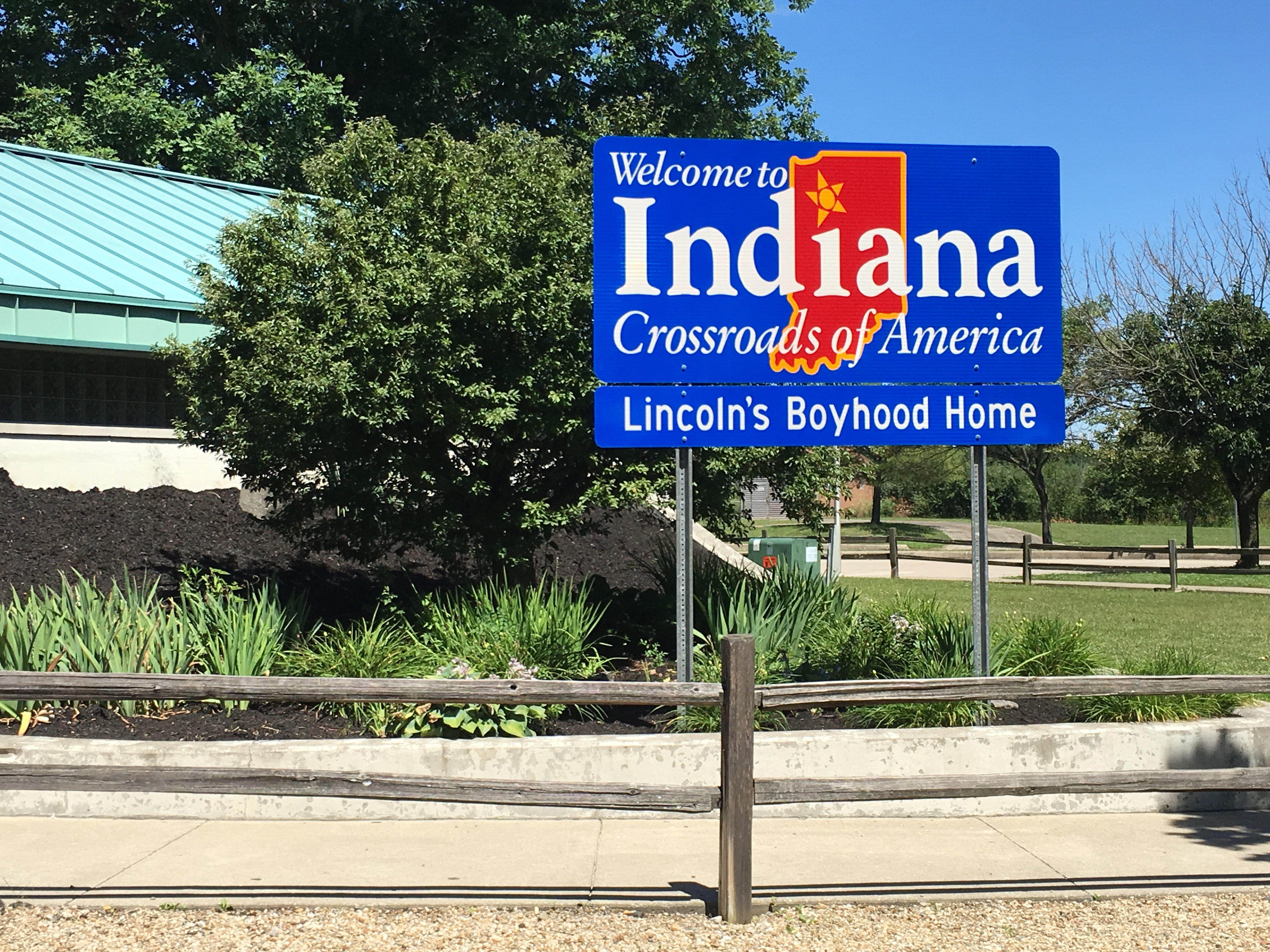 As the Support Crew arrived in Franklin, Indiana to help with finish line-set up, we were greeted by a beautiful, quaint town. We quickly raised the arch, set up the sound system, and laid out the merchandise tent. And by 5pm, the first cars were rolling through in front of the city's court house. 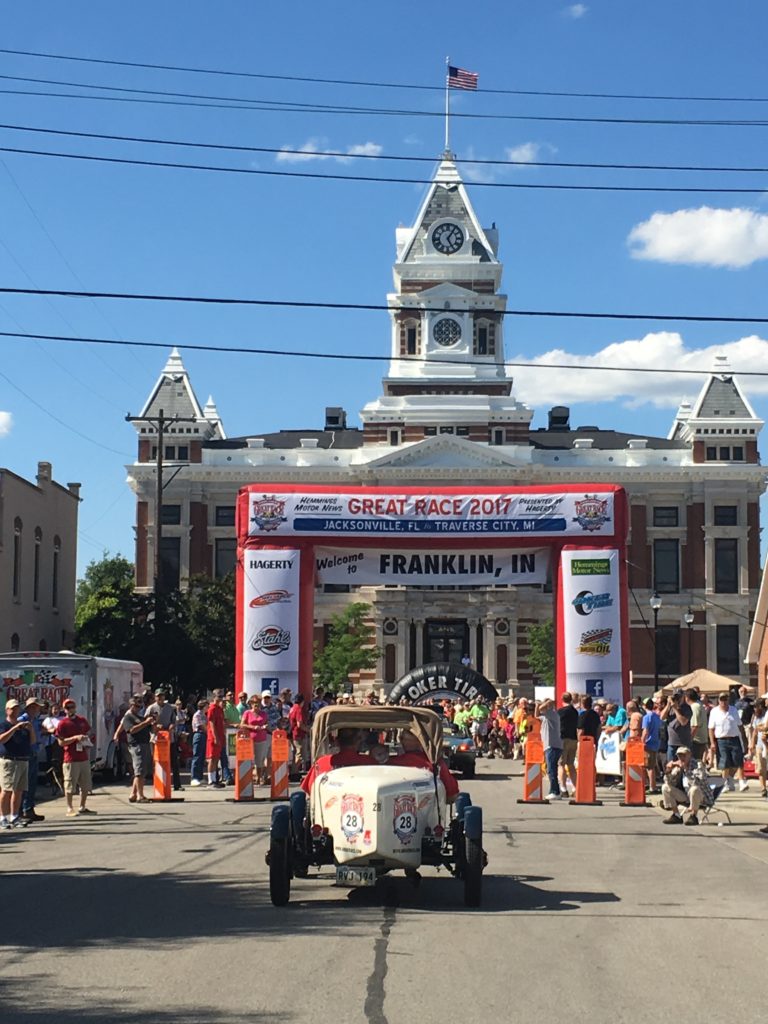 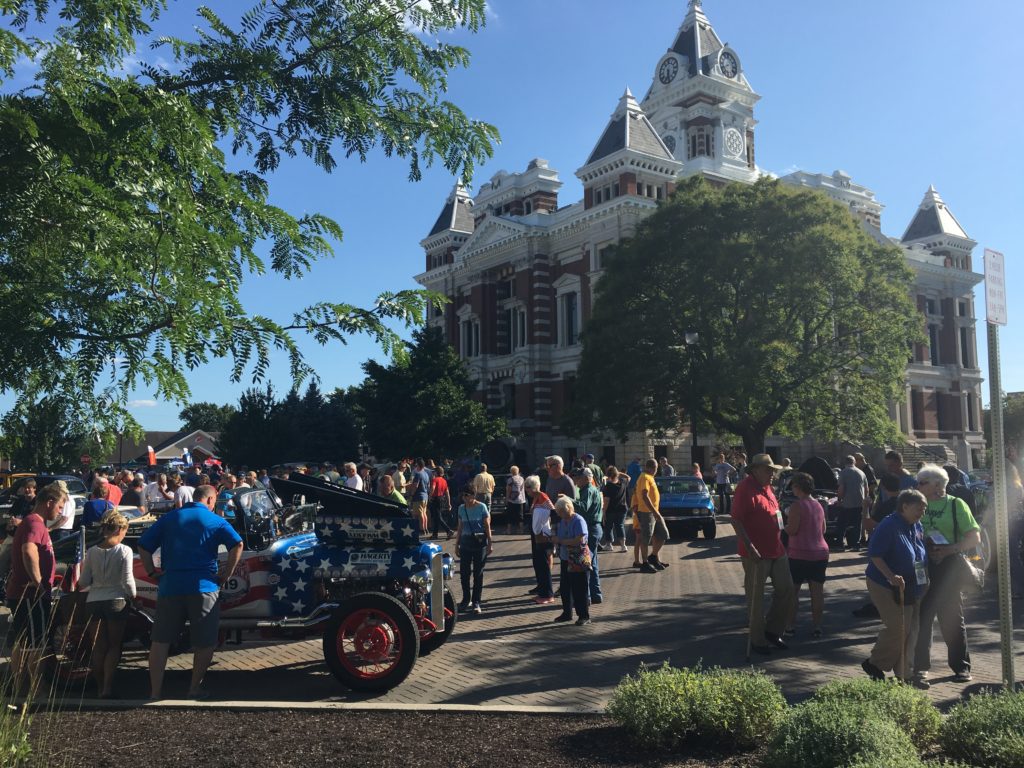 Nearly right on time, the Packard pulled around the corner and headed for the arch.

Jacob and Mike had a GREAT run, with some of their best checkpoint times under 15 seconds off! Big smiles at the finish line today, and even an autograph or two :) 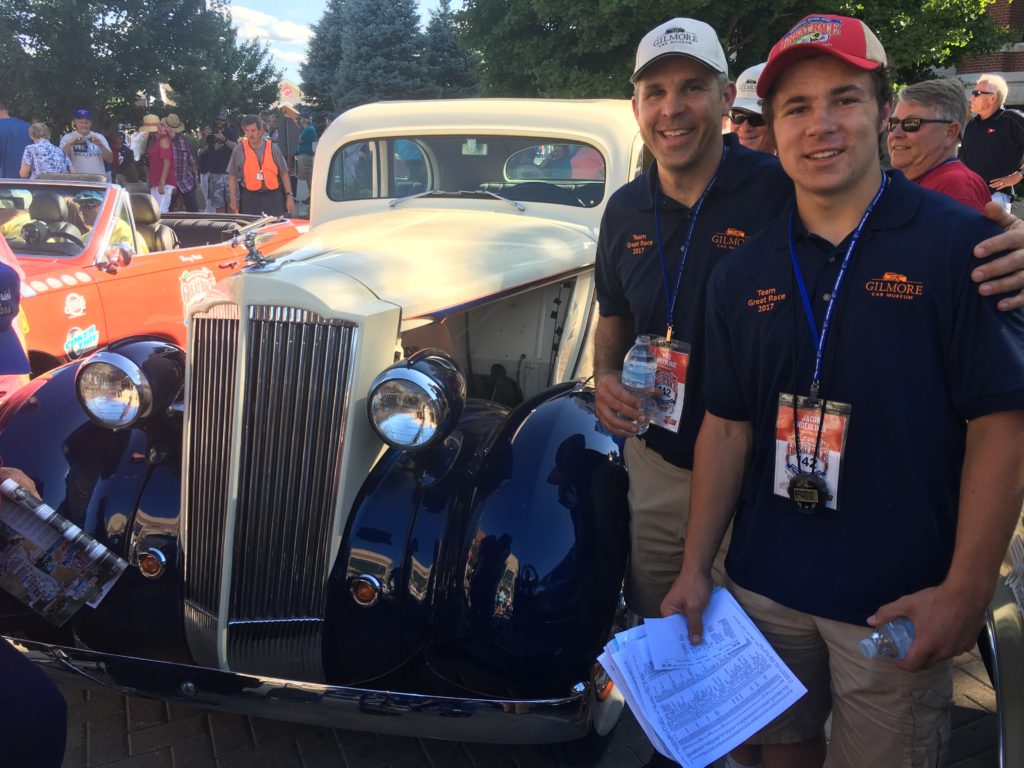 But, the question on everyone's mind - did our fix hold?? The team's problem solving and perseverance paid off and the car ran through all four check points from Bowling Green to French Lick to Franklin and the fix held up! Looking good... 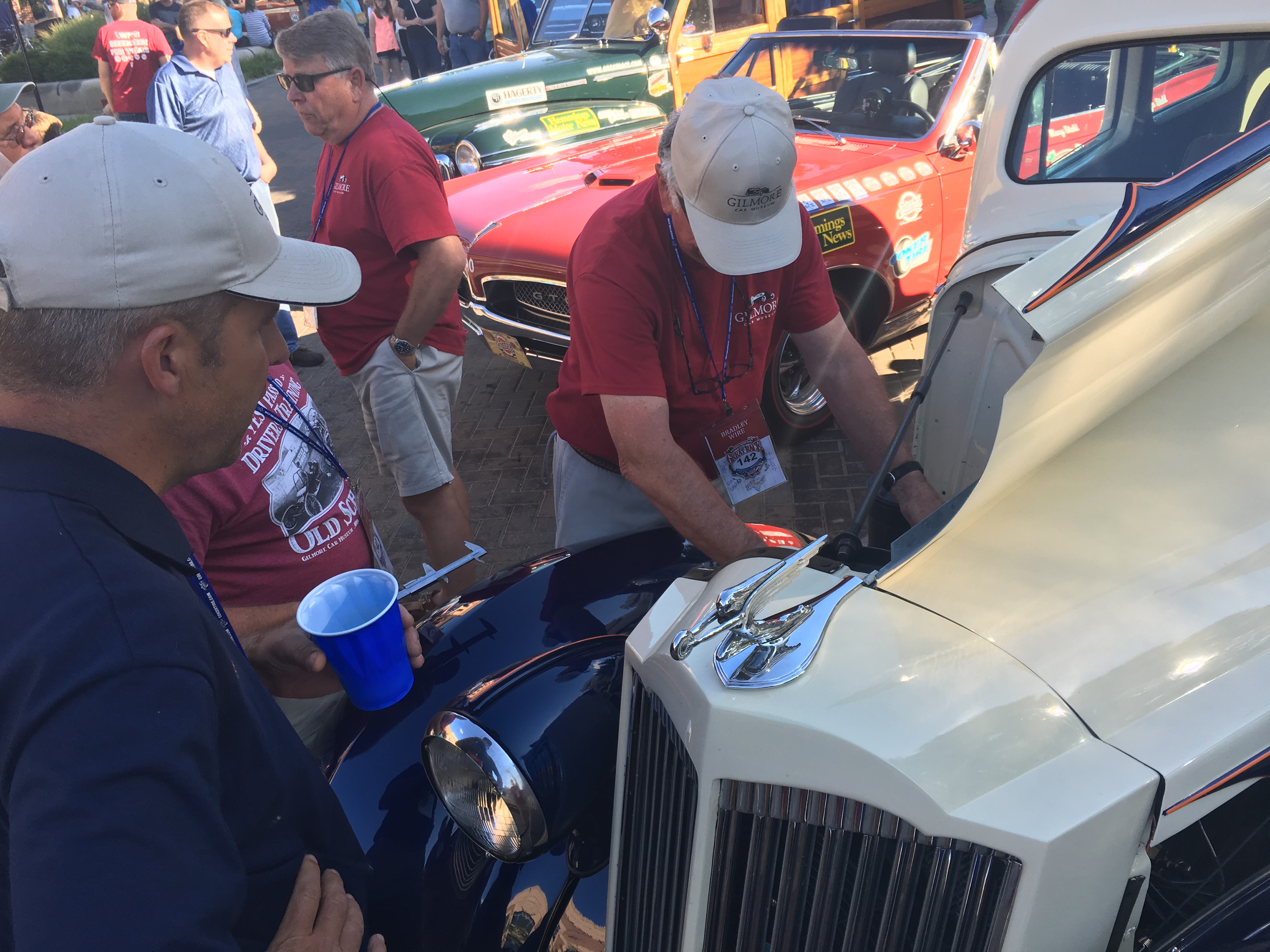 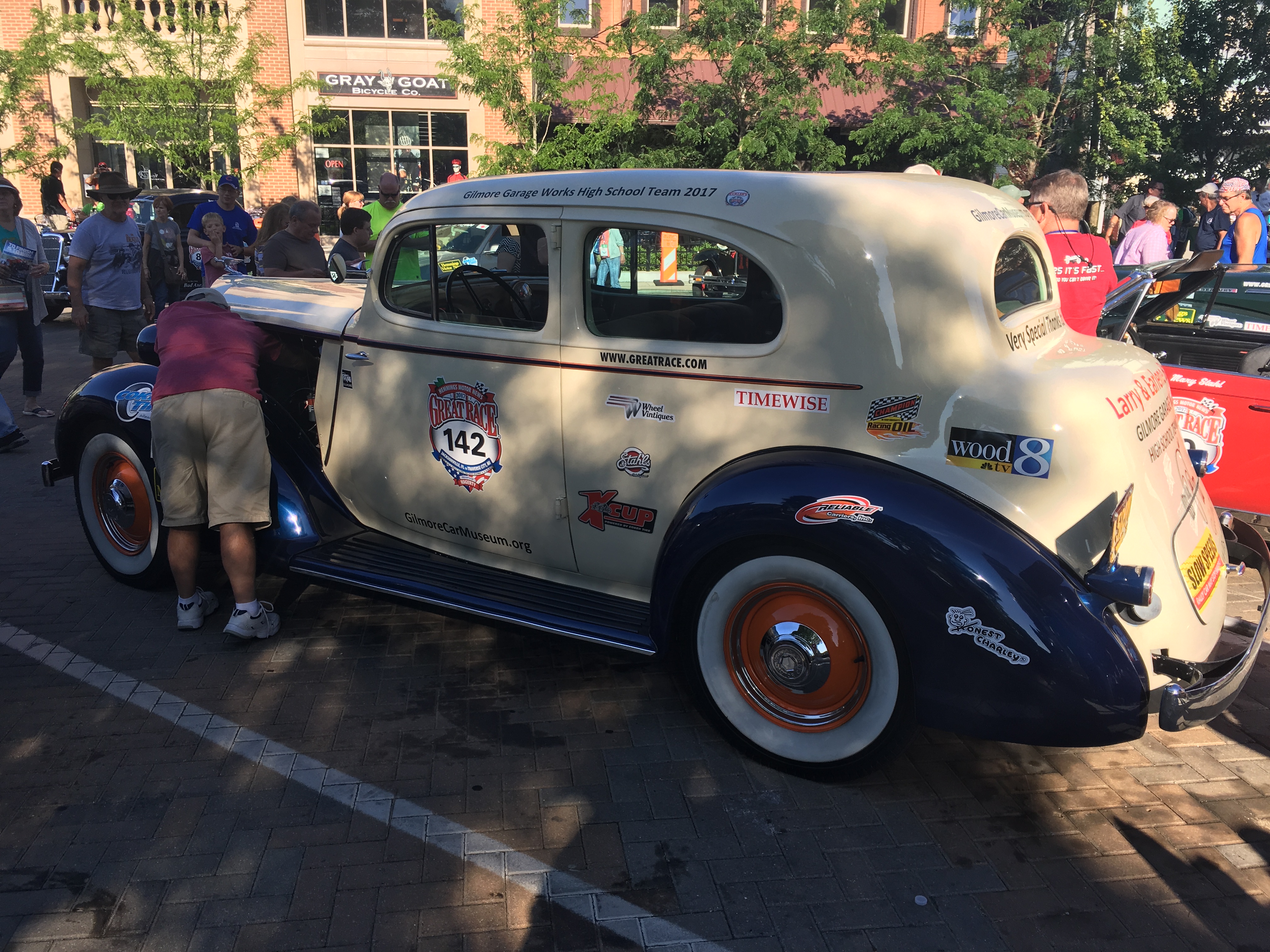 Until we were on the road to our hotel for the evening. 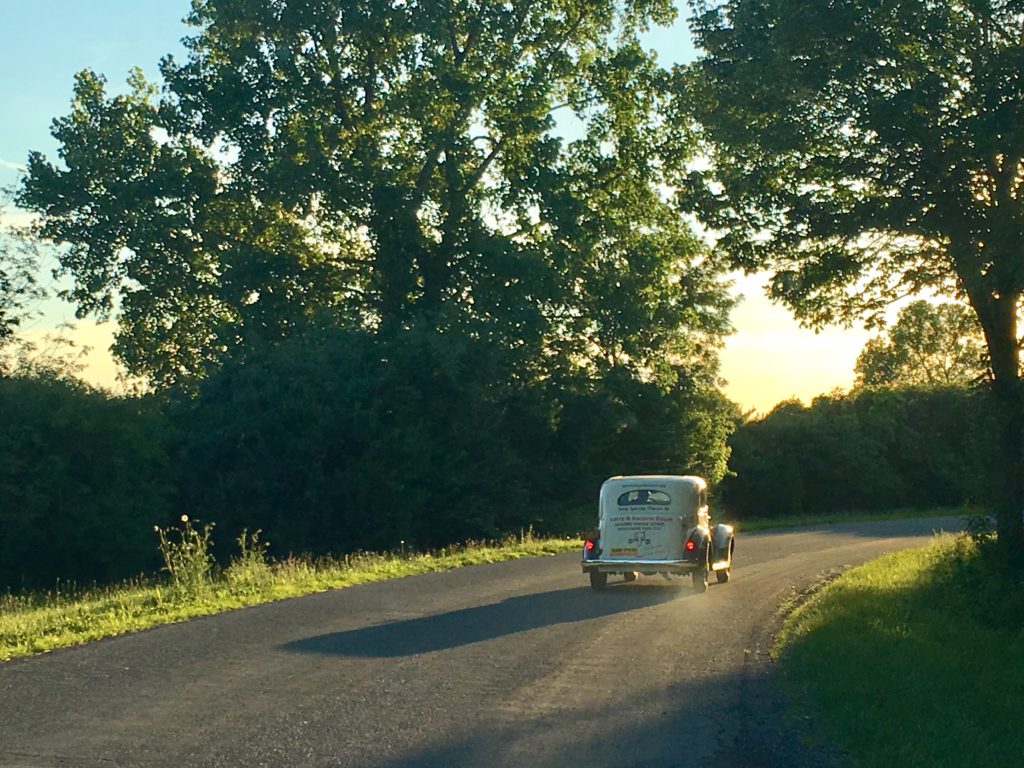 Sputtering and misfiring, low acceleration. We quickly pulled the car over and the team tried to trouble-shoot this NEW problem. After a few adjustments, it appears that the distributor is loose -- at the minimum. As I write this the team is currently down pouring over the car in hopes that tonight we can make another "quick fix" and be on the road by morning. Until then....