It’s that time of year when we begin to look for unique gift ideas and the Gilmore Car Museum near Kalamazoo, MI offers one idea that is truly matchless—A driving experience like no other.

Imagine yourself behind the wheel of a car without a gas pedal, fuel gauge or speedometer.

No, it’s not the latest version of some self-driving auto or the newest model Tesla electric vehicle - it's driving a nearly a century-old Model T Ford with technology that was common when the Chicago Cubs won their first World Series, the Titanic sank and the US entered the first World War.

“Think of it as going back to driver’s training—old school that is!” states Gilmore Car Museum spokesman Jay Follis.

Follis explains that for this special experience students are put behind the wheel of an authentic Model T Ford right out of the Museum’s collection and drive them within the historic campus. 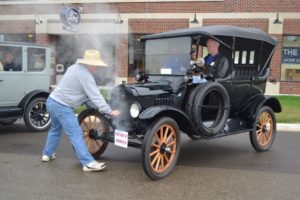 The Model T is controlled by three pedals on the floor, a handle beside the seat, and two small levers on the steering wheel. The only fuel gauge was a wooden ruler you’d place into the gas tank—most often located under the driver’s seat. A speedometer was an option and a hand operated windshield wiper wasn’t made standard until 1925. Oh, don’t forget the crank out front for starting the engine!

The Gilmore Car Museum, North America’s Largest Auto Museum, has offered Model T driving courses to the public throughout the summer for nearly a decade and each class date typically sells out quickly. In response, several additional classes have been added bringing the total to 22 sessions for the 2017 season.

Henry Ford introduced the Model T as a sturdy, low-priced car for the “every man” in 1908 and produced it with very few changes until 1927. It became affectionately known as the “Tin Lizzie” and was soon chugging off the assembly line and into history. More than 15 million were sold making the Model T the longest production run of any single model automobile, apart from the Volkswagen Beetle.

The History Channel website identifies the Model T Ford as “changing the way Americans live, work and travel,” and that it “revolutionized transportation in America.”

While the cars themselves may appear very simplistic by today’s standards, they do hold a challenge for drivers of modern cars. 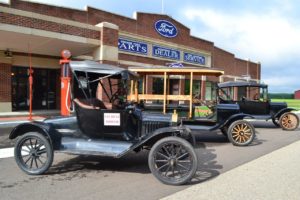 Are you or someone you know up for the challenge? If so, you’re in good company. Most antique car enthusiasts have never driven a Model T and most students are perplexed by the three pedals and the hand controls until they begin actually driving one.

Sound like a truly unique gift idea and a fun and interesting experience? The “Old School” driver’s training takes about four hours and each session is taught by a handful of long-time Model T owners and enthusiasts and includes practice driving in genuine Model T Fords around the Museum’s three miles of paved roadway. Museum historians provide a bit of history on Henry Ford, the early Ford Motor Company, and up close inspections of various Model Ts during the course’s special guided tours.

This is a rare opportunity to interact with these authentic vehicles, normally only seen on static display, by actually sitting behind the wheel and driving one.

Participants can sign up online to attend one of the 30 classes offered. Classes are open to any person with a official Learner's Permit or Driver's Licensed After successfully completing a road test in an genuine Ford Model T, each student will be presented with a Certificate of Completion and souvenir booklet. Class size is limited and they sell out quickly so make sure to reserve your spot today.