Cole Gathering to be Largest in History

JJ Cole and his family in a 1909 Cole High Wheeler. The only known example is registered for the event!

Seeing one Cole at a car show is rare, seeing two Coles at the same car show is unheard of, and seeing more than five at the same car show has not happened in many decades. Yet, this is exactly what is going to happen at the Gilmore Car Museum Pre-1942 Showcase on May 18, 2019. Several owners of Coles will be bringing them to the showcase to honor the 110th anniversary of the Cole Motor Car Company.

The Cole Motor Car Company is a great American success story and was the brain child of Joseph Jarrett Cole. Ingenuity, hard work, and collaboration with others built the company that was based in Indianapolis, Indiana and produced cars from 1909 to 1925. J. J. Cole was born near Connersville, Indiana in 1869 and was educated through a series of semi-connected employment opportunities. He learned the complete business of Carriage building in his 10 years at Parry Manufacturing in Indianapolis, the largest carriage factory in the world. He perfected his salesmanship by being Regional Director of Sales in Philadelphia, Toronto, Canada and St. Louis. While in St. Louis he was given the southwest territory of Texas on a commission basis by the Moon Brothers Buggy Company and saved $25,000 to invest in his own carriage business. The Cole Carriage Company flourished decided to get into cars by building 170 2-cylinder Solid Tire High Wheelers in late 1908 and early 1909. Deciding that high wheel cars were a car of the past he liquidated the carriage business and founded the Cole Motor Car Company in June of 1909. He began to build the 4-cylinder Cole 30, a completely modern car that often won in the racing circuit of the day. Cole even participated in the first Indy 500 and used his success to build cars of the finest quality. The Company grew, built factories, spent heavily on advertising and made a great reputation while accumulating capital.

Cole was considered an assembled car which meant that the cars were built with components from different suppliers. In 1913 Cole coined the term the “Standardized Car”. The ‘Standardized Car’ had nothing to do with low price like the assembly line with Henry Ford in the same year, as these models originally cost around $2500 after options and a Ford Model T was $550. This all had to do with Cole wanting to produce cars that consisted of components from suppliers that were the best and most modern in the industry, as well as set the standard or would be the standard. Examples of this were the 4- or 6-cylinder Northway powerplant, the complete electrical system with starting, lighting, and horn by Delco, Mayo German Silver Radiators, Stromberg carb, Spicer U Joints, Firestone tires and detachable rims, Timken axles, Gemmer steering, and an automatic Taylor Tire pump. The Delco full electrical system was used two years before Charles Kettering received his patent at Delco in 1915. Many of the other components included were first of or very early uses in a production car.

In the mid-teens the company slogan was ‘A touch of tomorrow in everything that we do today’ and that is how they designed and built their cars. Cole lived up to this slogan again in January of 1915 by introducing a 346 cubic inch V8 for their cars which was offered shortly after Cadillac did in September of 1914. However, Cole was the first company to have a detachable head on the engine for easy maintenance. By 1916 only the V8 was available in all models. Cole also featured the Springfield Convertible hard top body in 1916-1918 and developed the cutting-edge Aero Eight in 1918. Cole was second only to Cadillac in luxury car sales in 1919, the first with balloon tires in 1923, and paced the Indy 500 in 1924. Even though Cole was still profitable, they quietly began liquidating the company’s assets in January of 1925. In the early 20’s Cole was still producing high priced cars with the average being over $3000 while a Model T was down to $265. The auto industry was changing and going to smaller, cheaper, mass produced cars at the time. Building a smaller, cheaper car was not to Coles liking so he went out of business while still viable. JJ Cole died unexpectedly on August 8th, 1925 at age 56 and the great success story came to an end. 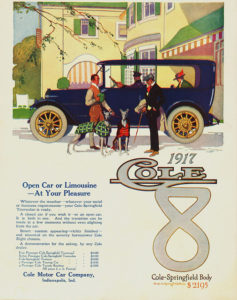 From 1909 – 1925 the Cole Motor Car company produced a total of 40,717 cars. Cole cars were larger luxury cars that had a lot of metal, aluminum, and other alloys in them so they were heavily scrapped during the scrap drives of World War II. Given this, there are only 77 known Coles to survive today. To keep track of the Cole autos, in 1980 the Cole Motor Car Club of America was formed. The club was very active and was run by Leroy Cole (No relation to the JJ Cole family). The club shared information between owners, published a newsletter, and maintained a registry of cars. By the time the Cole Motor Car Club of America wound down in 2009, they had identified 75 known Coles. In 2018 a new registry was created, and it is called the Cole Motor Car Registry. The new registry picked up where the old club left off and a website was launched in October of 2018 at http://www.colemotorcarregistry.com. The site has Cole history, a blog, pictures, and of course the registry of cars. Since the registry launched another two Cole cars have been identified to bring the total to 77.

The Cole Motor Car Registry was started by Kevin Fleck and his 18-year-old son, Benjamin Burnham-Fleck. They acquired a 1913 Cole series 9 Cole at an auction and fell in love with the car and the company. During their research they met Leroy Cole and he shared all of his knowledge and information that he had put together. Kevin and Ben decided to continue the legacy of Leroy’s hard work to preserve and share knowledge about the Cole Motor Car company and that is why they launched the new registry. Leroy has also donated his extensive archive of documents and artifacts dealing with the Cole Motor Car Company to the Gilmore Car Museum Research Library. This is the largest collection of information about Cole that exists anywhere. Once people see a Cole car, they can just see the quality and craftsmanship, but when they hear the history and story of the company it creates a deeper bond with the car. Kevin and Ben love sharing the cars and the history with people and it has been a great experience to date.

Kevin and Ben thought it would be exciting to get the Cole cars and owners together for the 110th anniversary and the Gilmore pre -1942 showcase is a natural place to do it. They are going to unveil a newly discovered 1909 Cole high wheeler at the event. Until this past December, no known Cole High Wheeler was thought to have survived. Besides the High Wheeler, a 1913 Cole ‘Standardized’ Car will be there as well as a 1917 Cole with the Springfield convertible hard top body. Also, a 1923 Cole two person Coupe that was built for JJ Cole’s son and was the test car for the new balloon tires, 4 wheel brakes, and a multi disc clutch will be there. The last known surviving Cole car, a 1925 Cole Brouette with body by Willoughby will be there. This car was the personal chauffeur driven car for Mrs. JJ Cole and is an all original car that was owned by the Cole family until 2007. Besides the first model car from 1909 and the last model car from 1925, other Cole cars will be there as well. The display will really allow people to see the evolution of the auto industry in both technology and style through the lens of one car company. This will be a once in a life time opportunity to see this gathering of Cole cars and you for sure will not want to miss it! 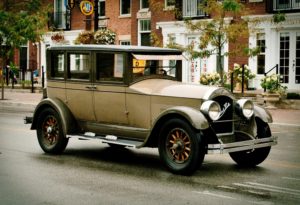 1. First car to use Firestone Demountable tires and rims – Harvey Firestone purchased the first 50 Cole cars in 1909 to give Cole working capital and to get his demountable rims out in the market

2. Cole was the first car company to have a car with 4 closable doors in 1910

3. Coined and Trademarked the term Standardized to describe their cars in late 1912. This term caught on throughout the US in many industries

4. Used the complete Delco electrical system and starter in late 1912, over 2 years ahead of Kettering receiving his patent on this. This was also shortly after Cadillac used it, though Cole’s had some differences.

5. Introduced a scale production V8 engine in January of 1915, 3 months after Cadillac. While both engines were made by Northway, the Cole version was different and was engineered by Cole and was the first V8 engine with detachable heads

6. First car company to only build cars that used V8 engines in 1916

7. First company to introduce Balloon tires as standard tires on their cars in 1923

Don't miss the Gilmore Pre-1942 Showcase on Saturday May 18thand this wonderful gathering of Coles.